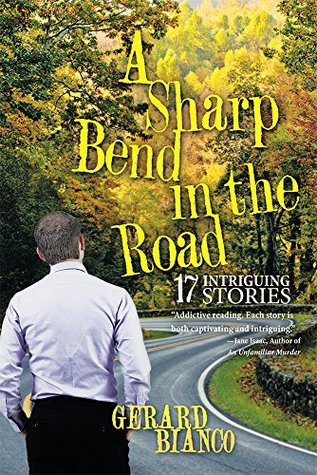 A Sharp Bend in the Road: 17 Intriguing Stories

At first I tried to grade each story and then average it out like some mathematical problem, and I ended up with a measly 3.59 stars! But then I realized that I had graded the lengthier tales higher than the shorter ones, and so I decided upon 4 stars as a matter of fairness, since the vast majority of the book’s length was enjoyable to me.

Three stories received 2 stars: “A Tattoo”, “It Wasn’t Me” and “It Was Just a Feeling”. They were absurdly short, completely pointless and left me sighing in frustration at the end. Those stories had no business being in this book, especially considering the gems that are to be found within it!

“Putz” was the book’s first story and a source of immense enjoyment to me. I can only say that I’ll say no more; I don’t want to let slip any spoilers.

“The Cursing Game” and “Yesterday, Thomas Was a Tree” were both thought-provoking tales, and gave me great respect for the author as someone seeking to do more than just entertain.

“A Sharp Bend on the Road”, “More is less”, “The Reluctant Hero”, “Behind the Closet Door” and “The Spirit of Christmas” were also entertaining reads. I suspect the author knows enough about the business of jewelry to have at some point been a professional in the area; this shines through in some of his stories and makes for a fascinating read.

I firmly believe that the stories I graded with two stars probably shouldn’t have made their way in there, since they risk distracting a reader from what I otherwise consider a well-edited and very recommendable book.

Disclaimer: I received a free copy of this book in exchange for an objective and non-reciprocal review.