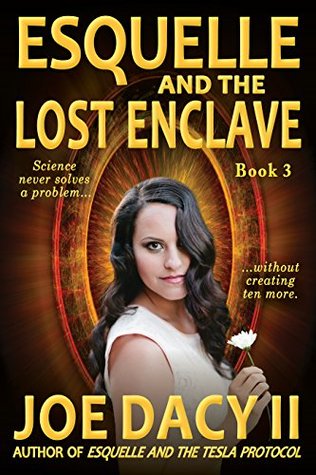 As an avid reader of the Esquelle series, I eagerly picked up The Lost Enclave in hopes of returning to the near-future world where an odd pair of French siblings seem destined to wreak havoc upon the established world order.

What I got instead was a wilder ride than I’d been expecting. The author habitually writes what I can only describe as cerebral books, but the simple fact is that the nature and plot of The Lost Enclave was a step above what I have gotten used to from him. And that is precisely the great virtue and potential flaw of the Esquelle series’ third installment (see more of this below).

I try never to include spoilers in my reviews but in this case I found myself sorely tempted to at least sketch out the scope of the novel over space and time. Then I remembered that most readers will have read the previous novels and decided to let it go.

Regarding the potential flaw I say the following: Esquelle and the Primary Key (book II) was the sort of sequel that could be read independently from the first installment, but The Lost Enclave is a different beast altogether.

As a result of this I offer a suggestion to any reader who happens across this book without first having read the previous installments: considering the story’s complexity, that much of the character development takes place in the first two books and also that many important references are made to events that take place in them, I sincerely recommend that you pick up Esquelle and the Tesla Protocol (Book I) instead. You would otherwise find that your ability to truly enjoy this finale would be hamstrung by the lack of back-story.

To those who have already read those books I can only say the following: the path this story takes will be a great surprise to you, although there may be moments where the more action-oriented reader may be uncertain of whether he is enjoying the book of not. However, the plot does in fact escalate until major events (read major combat) take place, delivering what I can only describe as a very satisfying conclusion to this series.

As to whether the Esquelle series will continue beyond this third book I am very curious indeed.