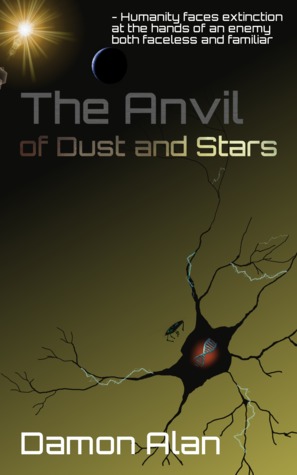 The Anvil of Dust and Stars

The Anvil of Dust and Stars is one of those books that you don’t see coming, not only due to the cover art and summary not doing it any justice, but also because of the way in which the story itself develops.

Up until about the 50% mark I’d say it was an enjoyable read. I had by then noted that I was reading an imaginative story based upon well-speculated scientific principles, a veritable hard military sci-fi book (thus hitting my genre preference dead center). But from mid-way onwards the story took off and became an excellent, excellent read. Maybe this happened because from that point onwards the author was more familiar with the intricacies of writing a novel and so was able to rock-and-roll with the talent he so clearly has. Maybe the story was simply meant to develop that way. Either way, I read the first half intermittently for a few days only to wolf down what remained from late afternoon to the evening.

I despise spoilers. I’ll give you none. Read for yourselves in full knowledge of the fact that you’ll be getting your money’s worth.