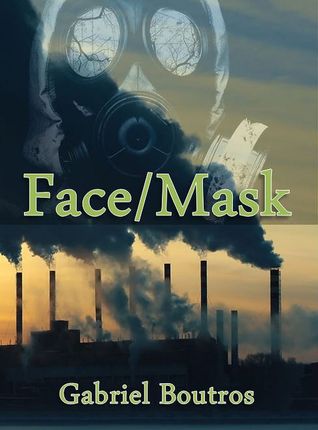 I hovered between giving this novel two or three star, and so decided to let a few hours pass by before writing this review. I’m glad that I did this, since it allowed me to evaluate the work more objectively.

Here are my final thoughts:

Despite being high on narrative and low on dialogue, and also excessively descriptive in the way it lays out a very smoggy future, Face/Mask nevertheless has a very elaborate back-story, one solid enough to act as a stable anchor for all the events taking place there. However, being highly descriptive, the reading was slow and difficult at first, since I was relegated to the passive role of soaking up articles of fact and back-story. At this point I can’t say I was enjoying myself and I would have stopped if not for the fact that I’d committed myself to finishing it.

I ended up giving it three stars: I can’t say I disliked the book, but I can’t say I really enjoyed it either. There is simply no humor, there’s an enormous amount of narrative and there are no heroes.

And yet the fact that there are no heroes is also its saving grace.
Where are the heroes of the future? Well, Face/Mask certainly isn’t a book about them. This work is a serious look into a possible future, one which stands as a warning to us all. The pace is slow and plodding, the mood bleak and depressing, the characters deeply flawed. Yet there are no stock characters here, each one has his or her own complexity, personal belief system and history. The plot doesn’t progress predictably or fall into well-established devices either. In sum, this is a serious, well-written work, and the hours after I finished reading it had me thinking a little about such a future and dreading it.

I suspect that, for hard-core dystopian fans at least, this work may be relevant.

However, there are simply too many points against it for me to award more than three stars. Face/Mask reminds me a bit of The Casual Vacancy by J. K. Rowling in that way. In other words, the book is exceedingly well written and the characters are portrayed in a very realistic light, but I was left without much empathy for them because of this. Those that did attract my empathy are the unsuspecting victims of all the characters’ foolish/cruel decisions. A very bleak book indeed.

Another issue is that the increase in tension is sabotaged by the plodding pace and before I knew it, I was already shifting around the aftermath searching for the climax. For all effective purposes that climax had already happened; it was a fizzle, and all that I am left with is the mood. This was not enough in itself for me to enjoy the book.

A last issue I have is with the suddenness of perspective shifts. The action jumps a bit from one scene to another, or one perspective to another, without the slightest prompt or space as warning. This is a little jarring, since every once in a while I found that I was no longer in A but in B and already deep into it.

In all, I’d say that Face/Mask isn’t a book for everyone, not even for those who enjoy dystopian dramas, but I allow that it’ll probably leave most of you wondering…

I received a free copy of this book for an honest and objective, non-reciprocal review.